Looking at the five WGA Original Screenplay nominees, only three were nominated for the Best Original Screenplay Oscar: “The Fabelmans,” “Everything Everywhere All at Once,” and “TÁR.” The difference could easily be chalked up to the fact that Martin McDonagh’s “The Banshees of Inisherin” and Ruben Östlund’s “Triangle of Sadness” were not eligible, as they were not written under the WGA’s Minimum Basic Agreement (MBA) or under a bona fide collective bargaining agreement of an international affiliate Guild.

The other two WGA Original Screenplay nominees, Jordan Peele’s “Nope” and Seth Reiss and Will Tracy’s “The Menu,” did not receive any Academy Award nominations, so should one of their fellow nominees win, it could really point to how the Oscars may choose to spread the wealth, as “The Fabelmans” co-writer Steven Spielberg, “TÁR” screenwriter Todd Field, and “Everything Everywhere All at Once” writers Daniel Kwan and Daniel Scheinert are also all nominated for Best Director and Best Picture.

While the acerbic “TÁR” is the perceived dark horse of all the major categories it’s nominated in, “Everything Everywhere All at Once” and “The Fabelmans” are considered frontrunners, duking it out in multiple categories with “The Banshees of Inisherin.” Should Spielberg or the Daniels win, there is a significant chance the Oscar could still go to McDonagh, as there may be a push to award the filmmakers elsewhere, but the WGA ceremony occurs right in the middle of final Oscars voting, so an acceptance speech could also sway WGA members who are within the Academy to add to the Oscars tally for either Spielberg’s or the Daniels’ films.

In the Adapted Screenplay race, there is the same overlap of three Oscar nominees, with the other two being “Black Panther: Wakanda Forever,” which is mostly nominated in the craft categories plus Best Supporting Actress, and “She Said,” which received zero Oscar nominations. Again, the other two scripts that made it into the Oscars race, Kazuo Ishiguro’s “Living” and Edward Berger, Lesley Paterson and Ian Stokell’s “All Quiet on the Western Front,” were ineligible. Sarah Polley’s screenplay for “Women Talking” and Ehren Kruger, Eric Warren Singer, and Christopher McQuarrie’s screenplay for “Top Gun: Maverick” are the only WGA nominees also recognized by the USC Scripter Awards, in addition to the Academy Awards, so consider this Adapted Screenplay race to be between them, with Polley as the favorite.

Finally, with the five documentary nominations, only Brett Morgen’s “Moonage Daydream” and Ondi Timoner’s “Last Flight Home” made the Oscars shortlist, so one can assume those to be the favorites. Tastes between the writers’ branch and the documentary branch could greatly differ, though. 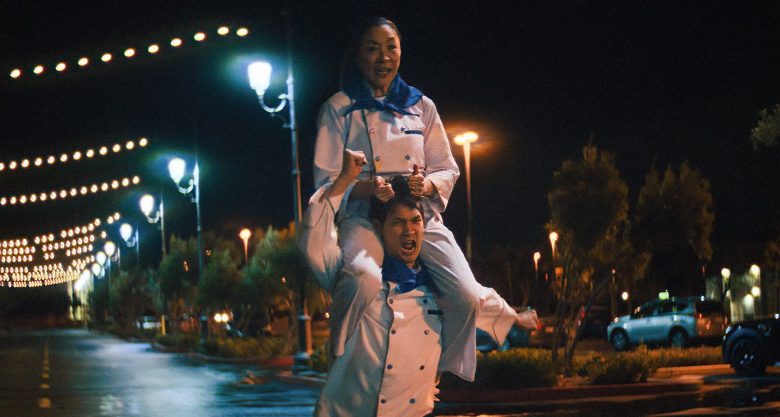 “Everything Everywhere All at Once”

See the full list of film nominees below, and click here to see the 2023 WGA TV Award Nominations.

“Everything Everywhere All At Once,” Written by Daniel Kwan & Daniel Scheinert; A24

“The Menu,” Written by Seth Reiss & Will Tracy; Searchlight Pictures

“She Said,” Screenplay by Rebecca Lenkiewicz, Based on the New York Times Investigation by Jodi Kantor, Megan Twohey and Rebecca Corbett and the Book She Said by Jodi Kantor and Megan Twohey; Universal Pictures

“Women Talking,” Screenplay by Sarah Polley, Based upon the Book by Miriam Toews; Orion Pictures/MGM