The timing of the 2023 Critics Choice Awards could not be better.

The Sunday event thrown by the Critics Choice Association, the largest critics organization in the U.S. and Canada with more than 500 members, rolled out right in the middle of Oscars nominations voting, giving its winners one more televised event to advertise what a great acceptance speech they would give, should the Academy Awards honor them in March.

Best Actor winner Brendan Fraser serves as the best example. “The Whale” star needed a win after his two main competitors Austin Butler (“Elvis”) and Colin Farrell (“The Banshees of Inisherin”) both got to give memorable speeches at the Golden Globes last week. (Fraser also didn’t attend the event, owing to his fraught history with the embattled organization.)

Clearly emotional about the award, Fraser still managed to strike the perfect tone, blending jokes about how critics overlooked his performance in “Furry Vengeance” with the inspirational closing words: “If you too could have the strength to just get to your feet, and go to the light, good things will happen.” Coming off a PGA Awards nomination as well, “The Whale” is finding a second wind right at the last minute, and could break into more Oscar categories than previously anticipated.

The big winner of the night, however, was A24’s other award season offering “Everything Everywhere All at Once,” which not only received Best Picture, and another Best Supporting Actor win for Ke Huy Quan, but also Best Director for Daniel Kwan and Daniel Scheinert. The pair gave a hilarious speech that still made star Michelle Yeoh tear up as Kwan thanked her.

It has previously been difficult for a director duo, especially one not tied together by a familial bond, to gain recognition in Best Director categories, but with a DGA Awards nomination under their belt as well, Daniels seemed primed to break new ground come Oscar nominations morning.

And though they have been the frontrunners in the Best Original Screenplay race (another category they won at the CCAs), with more established filmmakers like Steven Spielberg leading the Best Director conversation, it’s possible those prospective wins might get flipped, with “The Fabelmans” director receiving his first Screenplay Oscar for his most personal film yet, and the “Everything Everywhere All at Once” filmmakers continuing the now-five-year run of Best Director winners from marginalized backgrounds. 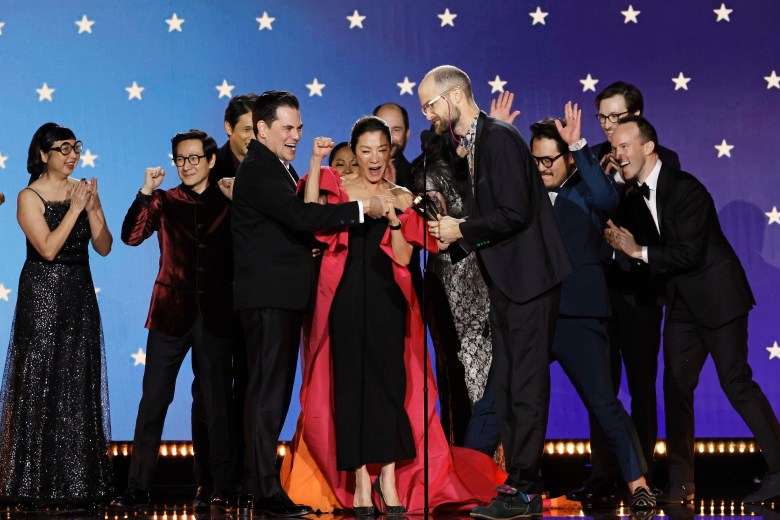 And speaking of what amount to historic Oscar wins, the critics proved to be unhelpful toward Yeoh’s bid to become the first Asian woman to win Best Actress, instead awarding Cate Blanchett’s performance in “TÁR” at the Critics Choice Awards.

Though the two-time Oscar winner skipped this year’s Golden Globe Awards, Blanchett was not away from the spotlight too long, attending the annual BAFTA Tea Party and accepting Best Lead Performance at the Los Angeles Film Critics Association dinner the day before the CCAs. With “TÁR” writer-director Todd Field being eclipsed by Daniels, Spielberg, and “The Banshees of Inisherin” filmmaker Martin McDonagh in the televised categories he has been up for so far, it seems like Blanchett has the most Best Actress momentum strictly because voters see that category as the only chance they will get to honor the film, while “Everything Everywhere All at Once” will have even more Oscar opportunities, like a win for Quan.

One win “TÁR” certainly will not win on Oscar night, but still got at the Critics Choice Awards was Best Score for Hildur Guðnadóttir. The film was disqualified from the category by the Academy, but the former winner still has a chance at another nomination for her shortlisted work in “Women Talking.” The director of that film, Sarah Polley, was another Critics Choice Awards winner, nabbing Best Adapted Screenplay.

“RRR” getting Best Foreign Language Film is another win that will be impossible to replicate at the Oscars, as India chose “Last Film Show” to represent it in the International Feature Film category, but S.S. Rajamouli’s acceptance speech could only help his Best Director bid, and another Best Song win for “Naatu Naatu” ensures that “RRR” will likely be represented at the Oscars in some capacity.

In terms of potential Best Picture nominees that cannot be written off yet, “Black Panther: Wakanda Forever” and “Glass Onion: A Knives Out Mystery” both capped off a week on the upswing that was their PGA Awards nominations with multiple wins at the Critics Choice Awards.

Angela Bassett gave an uplifting acceptance speech for Best Supporting Actress, cementing her frontrunner status for the category, while “Glass Onion” took home big awards like Best Acting Ensemble and Best Comedy. Unfortunately, the only televised speech on behalf of the latter was Janelle Monáe’s career retrospective #SeeHer Award win, and those two aforementioned categories are not ones the Oscars offer, but it is more visibility than other films on the Best Picture bubble, like “All Quiet on the Western Front” got.

Like the Golden Globes, the voting body for the Critics Choice Awards does not have overlap with the Academy, and often chooses Best Picture winners that go on to be the presumed runner-up at the Oscars (i.e. last year’s winner “The Power of the Dog”), but it is again smart for the ambitious awards show to put itself on the weekend it did.

As Oscars nominations voting closes, some of those “Everything Everywhere All at Once” wins could make all the difference.