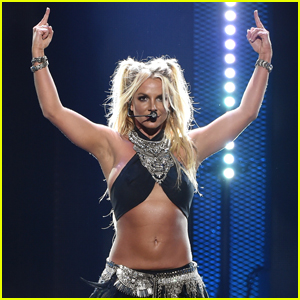 Britney Spears seemingly delivered a pointed message to the reports that she was suffering a manic episode while out with husband Sam Asghari for dinner.

The 41-year-old “(You Drive Me) Crazy” princess of pop generated headlines after she went out for a meal in Los Angeles on Friday evening (January 13).

Others in the restaurant filmed her as she hid behind a menu in an attempt to get some privacy. Sources told TMZ that Sam stormed off after Britney has a “manic” episode while they were seated.

She didn’t directly react to the reports. However, Britney took to social media to share what appeared to be a pointed response to reports about the encounter.

Taking to Instagram, Britney shared a video of herself dancing to Divinyls‘ “I Touch Myself” in a short white dress and matching boots.

Her most oft-repeated dance move in this clip isn’t her spinning for the camera. Instead she repeatedly give it the finger. The video was presented without a caption from the star, and the comments section is locked.

Her latest update comes after Britney reacted to photos of herself that were shared online last weekend.