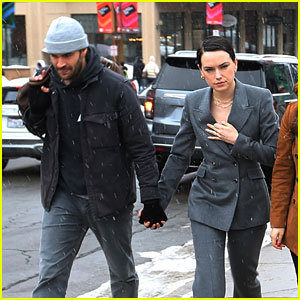 Daisy Ridley has the support of her husband Tom Bateman while at the 2023 Sundance Film Festival!

The 30-year-old actress was at the festival for the premiere of her new movie Sometimes I Think About Dying on Thursday (January 19) in Park City, Utah.

While Tom didn’t walk the carpet with Daisy, he was seen holding her hand while heading into the venue. The couple have never confirmed their marriage to fans, but photographers say that they were overheard saying they are indeed married.

Daisy was joined at the event by co-stars Brittany O’Grady and Bree Elrod, director Rachel Lambert, and others.

Here’s the film’s synopsis: “Fran (Ridley), who likes to think about dying, makes the new guy at work laugh, which leads to dating and more, now the only thing standing in their way is Fran herself.”

Daisy has been in a relationship with her Murder on the Orient Express co-star Tom for years and rumors have swirled that they got married in 2020, but nothing was ever confirmed. Photos showed the couple wearing what looks to be wedding rings.