Eamonn Holmes has provided a health update as he made a big adjustment to his home.

The GB News presenter, 63, has been dealing with some health issues over the past few years.

He has been open with fans about his battle with chronic pain, and underwent an operation in September in a bid to help him.

However, then weeks later, he suffered a fall at his home and had to undergo another operation.

Now, Eamonn is recovering from his fall and operations and has even been back on TV at GB News.

Over the weekend, the star was surprised by one of his telly pals and former This Morning co-stars.

Rylan Clark paid a visit to Eamonn and wife Ruth Langsford and even tried out a new piece of equipment in their home.

Rylan revealed that a stairlift has been put into Eamonn and Ruth’s house.

He shared a video of himself trying out the stairlift as Ruth is heard giggling in the background.

Rylan says in the clip: “Can I just say, I know you’ve been through it dad but you’ve got an easy life here!”

Rylan captioned the post: “Well someone had to go and check out the tech…. @eamonnholmes. Good to see you on the mend.”

In the pic, the pair are seen sitting on the sofa while holding up Eamonn’s walking sticks.

Well someone had to go and check out the tech.

Eamonn gushed: “Look who called in to see me today. What a surprise!!! Better than medicine you are Rylan my friend. Gosh we laughed and laughed.”

Fans loved seeing them together as one person wrote: “Awwww how lovely!!!! Laughter is the best medicine I think!”

Another commented: “Lovely to see you looking so happy.”

How is Eamonn doing?

Eamonn recently made his return to GB News and offered an update on his condition.

He told his co-host Isabel Webster: “I’ve had some issues with my back and legs [that are] not solved.

Read more: GB News: Eamonn Holmes reveals he fell victim to scammer who ‘stole a lot of money’ from him

“[I’m] better than I was but I’m not better but I think being back to work will help speed up that process.”

GB News’ Breakfast with Eamonn and Isabel airs weekdays from 6am. 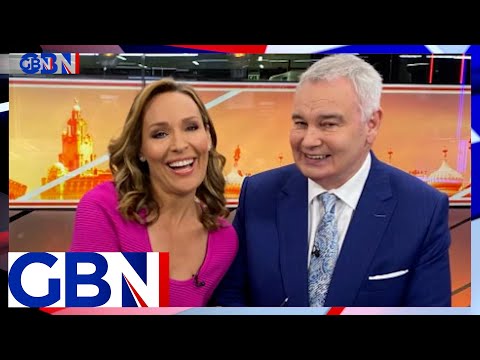