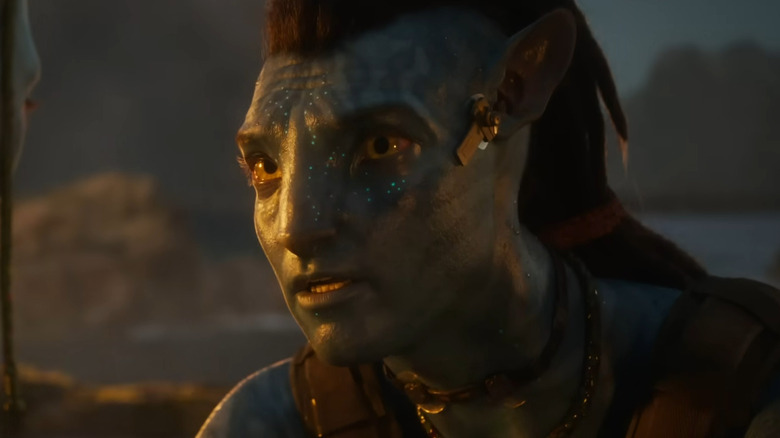 James Cameron makes movies a little differently than the rest of Hollywood. You’ve got your Rian Johnson types, who build narratives around relatable struggles, you’ve got your Todd Fields types, who fashion stories around challenging material, and you’ve even got your Jeff Tremaine types, who just want to make you feel something (for the sake of inclusivity, I’ll go ahead and mention that horror directors fall into this category, too). Then there’s Cameron who, for whatever reason, decided that movies should exist for two purposes: First, to funnel mountains of money and public interest into your personal hobbies and, second, to not so much push but shatter the current boundaries of technology. To his credit, the blueprint seems to be working pretty damn well.

Cameron wanted to poke around the submerged ruins of the Titanic, which he considered “the Mount Everest of shipwrecks,” so he made “Titanic,” a colossally expensive film that made colossal amounts of money. Nearly 30 years later, it’s still sitting in the top 10 highest-grossing films of all time. Cameron’s prior works, like “The Terminator” and “Aliens,” were thoroughly successful in their own rights, but nothing in comparison to the unprecedented victory that was freezing Leonardo DiCaprio to death. With near carte blanche power to do whatever he wanted forever, Cameron reshaped what it meant to film motion capture with “Avatar” in 2009 and what it meant to film underwater with “Avatar: The Way of Water” in 2022 — both of which also found their way to the Top 10 highest grossing films of all time.

The question is, then, with “Avatar 3” and beyond already in the works, what new frontier will Cameron tackle next? What if it’s something he’s already shown a personal interest in, like zero gravity?

Space Rollercoasters Vs. CGI And Wires 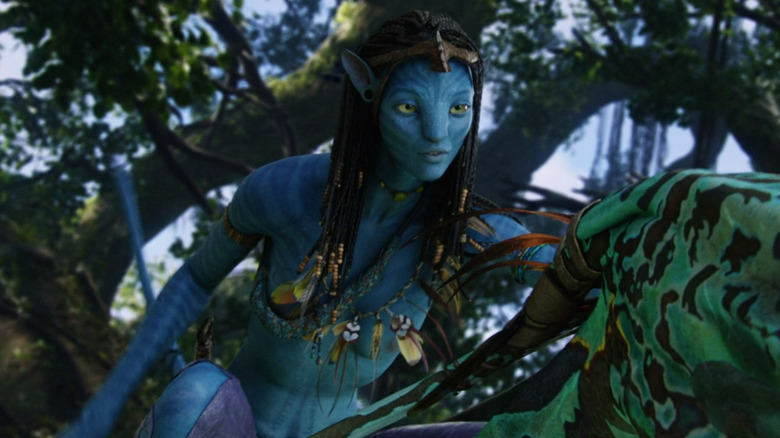 Like filming with motion capture or filming underneath the waves, filming with zero gravity isn’t exactly new — it’s just limited. Right now, the effect can be achieved practically with parabolic flight which, in laymen’s terms, means treating an airplane like a rollercoaster. The pilot must skyrocket the aircraft upwards in a trajectory mapped against the center of the Earth, and then promptly plummet downwards at the exact same speed. Any commercial plane can do it and, if it’s done right, will net the passengers approximately 20 seconds of weightlessness. It’s incredibly cool but, like I said, it’s frustratingly limited, both by time and expenses.

Because of the steep barriers to entry, most movies that feature zero gravity sequences simply simulate the effect with CGI and wires. Films such as James Gunn’s “The Guardians of the Galaxy,” Christopher Nolan’s “Interstellar,” and Stanley Kubrick’s “2001: A Space Odyssey,” all feature space walks filmed in this way. It’s just easier — but when has that ever stopped James Cameron?

In 2010, and in partnership with Elon Musk’s SpaceX, Cameron boarded GForce-One, a modified Boeing 727-200 jet, to experience zero gravity for himself. We’ve already established that Cameron’s film work naturally follows his personal interests, so it’s not really that dramatic a leap to theorize how Cameron might attempt to feature enhanced zero gravity tech in his future “Avatar” installments.

Funny thing, though, the first script treatment for “Avatar: The Way of Water” almost paved the way for that very thing. 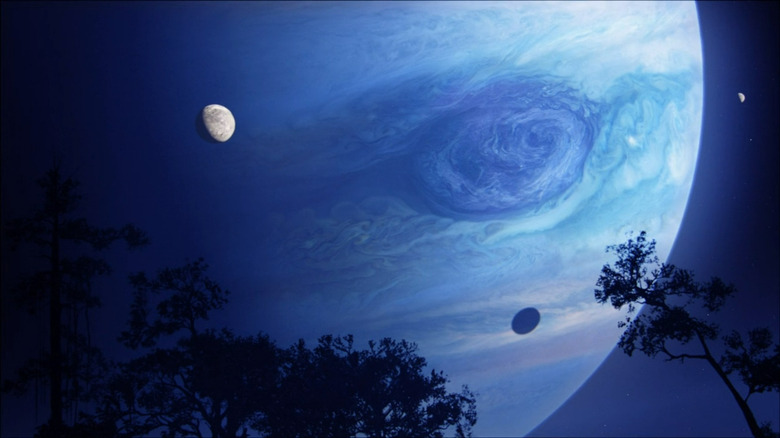 “Avatar: The Way of Water” wasn’t always a “Legend of Zelda” fanfic. No, before James Cameron chose to explore the vast and terrifying expanses of the ocean, the “Avatar” sequel was written to explore the vast and terrifying expanses of outer space. In this version of the script, the Na’vi would have done glorious battle in zero gravity using nothing but their bows and arrows. Ultimately, that script was scrapped because Cameron believed “it didn’t play enough by ‘Avatar’ rules.” Don’t misunderstand, he loved the idea of space archery, so much in fact that he reworked the concept into a series of Dark Horse comics (it’s almost like he’s mimicking the other famous “Avatar” franchise’s every move) that cover the time gap between “Avatar” and “Avatar: The Way of Water.”

In reference to the idea, Cameron readily stated that he would love to see that kind of weightless combat play out on the big screen. Well, if anyone is capable of making their cinematic fantasies come to life, it’s Cameron. We know that he wants to see more zero gravity in his films, we know that he loves the concept enough to have personally sought out the experience for himself, and we know that the guy possesses a marketable ability to restructure the laws of what is and isn’t possible. What’s more, we know that “Avatar 5” will see the Na’vi travel to Earth, and there’s a lot of space between Pandora and our home planet so, even if Cameron doesn’t explore zero gravity in “Avatar 3,” he’s already defined a narrative justification to circle back later.

Should pioneering the medium be on his mind, however, he better work fast, because other studios are already looking toward the sky. 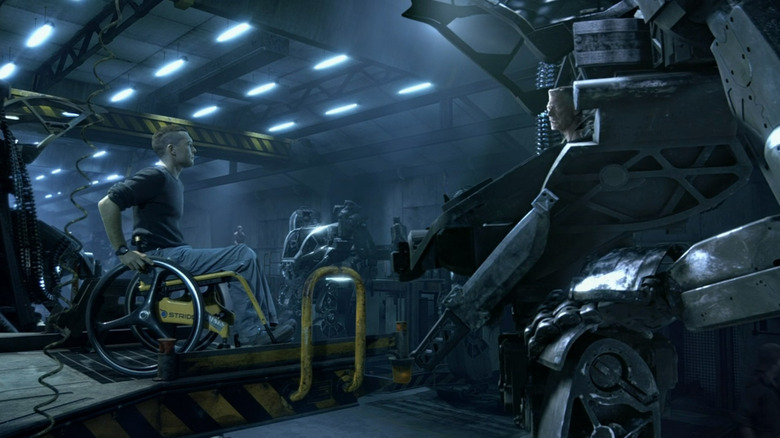 Donna Langley, the chairwoman of Universal Filmed Entertainment Group, wants to launch Tom Cruise into space. Not for the usual reasons, but rather because she and the star “Top Gun: Maverick” want to create a film that sees Cruise doing real space stuff in real space. Shooting among the literal stars is pretty much the only way to up the ante after Cruise filmed a promo for “Mission Impossible: Dead Reckoning Part One” while skydiving over the coast of South Africa. The movie is currently in the very early phases of development, but Langely stated that she wants to make Cruise “the first civilian to do a spacewalk outside of a space station.”

Langely’s wording is hyper-specific here because Russia already won the space race back in 2021 with “Challenge,” which hits theaters in April, later this year. Lead actress Yulia Peresild and the director, Klim Shipenko, spent 12 days in space shooting principal photography aboard the International Space Station. Beforehand, both Peresild and Shipenko underwent rigorous training to prepare for the experience and required 10 days of rehab post-filming to reacclimate to Earth. The coolest bit? Real cosmonauts aboard the ISS served as the rest of the cast and crew.

Doesn’t this all sound exactly like the kind of thing James Cameron would want to revolutionize? Sure, Peresild and Shipenko already filmed inside a space station — they won the race. Cruise will probably get his historic spacewalk, too, but there’s no way that Cameron won’t be tempted to at least try to leapfrog them both by blasting his entire crew off-world.

Besides, if anyone has the funds and the connections to do it, it’s him. 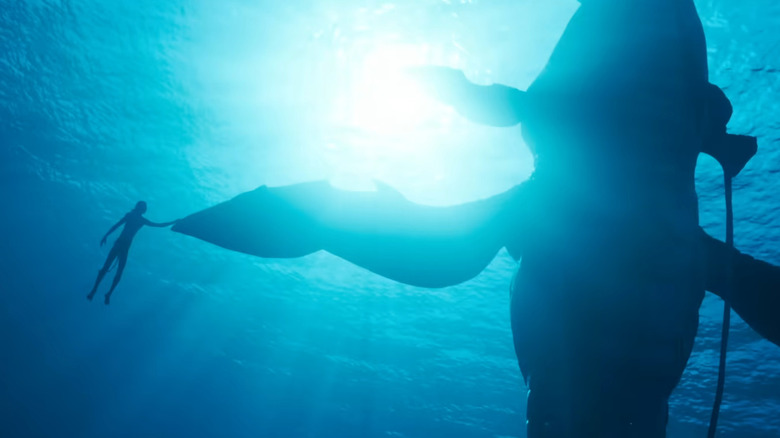 We’ve briefly mentioned how much money James Cameron throws at his movies (and much they end up making) but we haven’t offered any hard numbers. Between “Titanic,” “Avatar,” and “Avatar: The Way of Water” alone, James Cameron’s box office earnings are an astounding 7 billion, a number which isn’t even finalized because “The Way of Water” is still in theaters and only Eywa knows when that’ll end. The point is that he’s pulled in some serious coinage. Granted, Cameron said that his “Avatar” sequel would need to make at least 2 billion and “The Way of Water” has yet to do so, but it’s pretty damn close.

His budget, and the value of his Intellectual Property, could very well be the backbone required to support the research and development demands that would come with getting an entire cast and crew into space. And, while I can’t quite pinpoint the exact value of this particular connection, it shouldn’t be ignored that Cameron has ties with Elon Musk, the CEO of SpaceX, a man notorious for throwing money at whatever sparks his interest.

Conversely, these same factors could be the reason that Cameron discovers a method to bring a little bit of space back down to Earth. If improved zero-gravity cinematography is what he’s after, maybe there’s a way to simulate it that doesn’t require hiring a fleet of aircraft. It doesn’t matter how safe parabolic flight historically is, if there’s enough of them up in the air, the risk will rise in equal measure.

Who knows, maybe he could just upgrade an iFly or something? Whatever happens, it’s becoming more and more obvious by the day that betting against Cameron is always the losing play.

Read this next: Movies Like Avatar That Are Just As Visually Stunning

The post Filming In Zero Gravity Could Be James Cameron’s Next Frontier For The Avatar Movies appeared first on /Film.