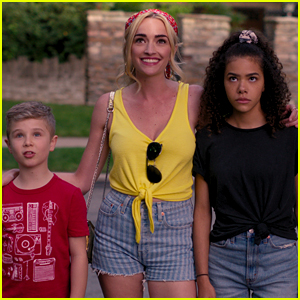 Ginny & Georgia showrunner Debra J. Fisher is giving an update on when we might have an update about a possible season three of the hit Netflix series.

Season two debuted just a few weeks ago, and has climbed the Netflix popularity charts (as expected).

Here is the show’s synopsis for season two: “How do you live with the knowledge that your mother is a murderer? That’s what Ginny is going to have to figure out. Burdened with the new understanding that Kenny – her step-dad – didn’t die of natural causes, now Ginny must deal with the fact that Georgia not only killed, she killed to protect Ginny. Georgia on the other hand would much prefer that the past be left in the past, after all, she’s got a wedding to plan! But the funny thing about Georgia’s past is that it never stays buried for long…”

Keep reading for the update…

Debra was asked about the possibility of a third season.

However, she also revealed when Netflix even begins those talks, telling THR, “Just from doing it in season one with Netflix, they wait 30 days to get all the numbers and before we have a talk. What’s great is that we all have TVs and we can see that we’re number one. I think Netflix did tell us we’re number one in 84 countries and that was a few days ago, so maybe more. I will say that certainly bodes well for us in 30 days if that keeps going the way that it is. But Netflix’s policy is they wait 30 days to see all the data, and then fingers crossed, they will give us a season three.”

She continued, “We’re not writing any scripts or anything like that, but we know where we want to go. We would love to get in a writers room up and running to get going with this. Seeing everybody watch the show and seeing all the excitement for the show, I will say that it’s been hard to not think about season three and where we want to go. Because when [creator Sarah Lampert] and I pitched the show to Netflix, we did pitch four seasons, so we know what we want the end game to be. We know what we want the last episode to be.”

Find out which 3 Netflix TV shows were canceled already in 2023.