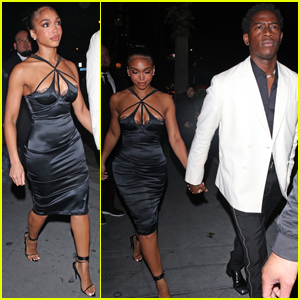 Lori Harvey and boyfriend Damson Idris stay close to each other as they make their way to the model’s birthday party on Friday night (January 13) in West Hollywood, Calif.

Shortly after the 26-year-old celeb made her relationship with the 31-year-old actor Instagram official, the pair hit up Fleur Room Lounge to celebrate her special day.

Lori wore a black dress with strappy heels, and Damson wore a white blazer with black pants with a tuxedo stripe down the side.

Her birthday celebration was attended by so many stars, including Kendall Jenner, Lil Nas X and Hailey Bieber – all of whom made statements in sheer looks.

Who else was there?

If you missed it, Lori seemingly reacted to a major rumor about her, Diddy and his son on the same day that she confirmed her relationship with Damson.