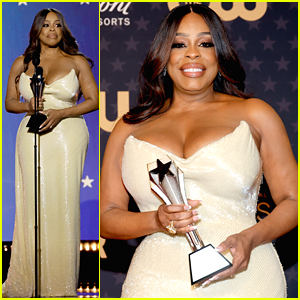 The actress picked up the Best Supporting Actress in a Limited Series honor for her role as Glenda Cleveland in Netflix’s Dahmer – Monster: The Jeffrey Dahmer Story.

During her speech, Niecy shared the story of her mom’s unwavering support of her dreams, and also called out the doubters she’d win any award for her acting skills.

“When I decided to become an actor, I saw myself doing drama. And the industry was kind, but they said, ‘Stay in your comedy lane.’ Sometimes people want to leave you where they meet you. And I did what I normally do: I cry,” Niecy shared on stage after accepting her honor. “I told my mother and I said, ‘Momma, don’t you think I’m a good dramatic actress?’ And she said, ‘Girl, I don’t.’”

She went on, saying that her mom told her “‘But you can be! You find the best class in this town and I will work overtime to pay for it.’ Thank you, momma. All you need is one!”

“Thank you, Jessica,” Niecy shared in her thank yous, shouting out her wife, Jessica Betts. “Thank you, Netflix. Baby, you picked me up when I was gutted from this work. Ryan Murphy, Evan Peters. And I share this award with Glenda Cleveland. On this night, we are fully seen.”

Niecy concluded, “Finally, to everybody who doubted this Black woman and told me what I couldn’t do, I want to lovely and humbly say, ‘In your face!’”

Check out 20+ pictures of Niecy Nash-Betts with her Critics Choice Award!