Jimmy Laird, a well-off therapist working at a pristine practice somewhere in Pasadena, is frustrated. His patients complain — about their spouses, their friends, their chatty barista — and Jimmy (Jason Segel) tries to nudge them toward better choices through a healthier mindset. But for all the listening he does, they aren’t responding in kind. Jimmy’s mentor, Paul Rhoades (Harrison Ford), empathizes with his younger co-worker’s exasperation and distills what he’s going through into two simple words: “Compassion fatigue,” Paul says, and explains to Jimmy that what he’s feeling is typical. All therapists get worn down by stagnant cases, and you just have to do your best to “stay non-judgemental.”

Jimmy, just like the patients driving him mad, doesn’t listen. Instead, he becomes what Paul calls “a psychological vigilante,” and starts bossing his patients around. He brushes past boundaries, he blackmails them, and he generally tries to expedite their breakthroughs with a breakthrough of his own. Jimmy’s rogue technique is the essential half of “Shrinking,” the new Apple TV+ comedy from co-creators Bill Lawrence and Brett Goldstein (both of “Ted Lasso” fame), and the series does a fine job setting the stakes of such an endeavor: outlining why Jimmy’s pushiness defies the tenets of modern psychology, while understanding the urge for a hurried approach to healing. Turns out there are risks to robbing people of their autonomy, and not just for the patients.

But “Shrinking” is upended by its other half — the frivolous half; the 2000s-era sitcom half; the half that wraps bad behavior in a warm-and-fuzzy blanket so they seem cozy and nice. Apple’s overzealous “Ted Lasso” successor hocks the same brand of quirky kindness outshining a dark reality. Instead of a football coach applying his believe system in a new sport, we get a grieving therapist mapping his own issues onto patients in pain. As a casual dalliance, the half-hour comedy’s relentless charm offensive hums along. Episodes are well-constructed, the production brims with homey-yet-expensive style, and the indie rock soundtrack sparks pathos and joy in equal measure. It’s just the longer you think about “Shrinking” and Jimmy specifically, the more infuriating it becomes.

But hey, who can criticize a guy whose wife just died? That heavy backstory props up Jimmy’s poor choices early on, after her death sent him into a yearlong spiral. (Side note for producers: Using Paul Buchanan’s “Mid Air” to introduce the memory of a lost loved one is emotional manipulation in the first degree and retroactively deemed illegal for all movies and TV shows released after “About Time.”) He’s been numbing his pain by isolating from those who truly care about him — until the show starts, when he’s at rock bottom and ready to hug his way to the light.

Doing so means engaging with characters who never feel like actual people; over-written and over-acted neighbors and friends who are always nice, who always love each other, and who always (eventually) do the right thing. There’s Liz (Christa Miller), a retired friend of the family who lives next door. She loves gossip and hates people (or, at least, pretends she does). She bakes all the time, except when she’s polishing rocks. She’s casually mean to her husband, but in a “funny” way, and she’s always around, which becomes her defining character trait. Her initial foil, Gaby (Jessica Williams), soon becomes her best friend (because of course). Gaby is one of three therapists at Paul’s practice, as well as Jimmy’s late wife Tia’s best friend. But despite her close ties (and a charming performance by Williams), she’s rarely more than a utility player — asked to fit into any position at any moment, whether her natural arc allows for it or not.

There’s also Brian, an estate lawyer and Jimmy’s best friend, who Michael Urie manages to liven up beyond the “gay best friend” stereotypes, and Sean (Luke Tennie), a patient who becomes a pet project (and, in addition to Tennie’s affability, an under-utilized source of genuine struggle). These sweet folks are highly watchable — so long as you can stomach their infectious niceties — but they always take things one line, one laugh, one gesticulation too far. “Shrinking” strains for heartwarming humor hard enough to send some into cardiac arrest, and even so, its success ultimately boils down to its two leads: Jimmy and Paul. Both are therapists. Both struggle to connect with their daughters. Both struggle to connect with each other (or, at least, pretend to). Given the father-son dynamic, one can forgive a bit of biographical overlap, but it’s harder to excuse the faults of one when seen in direct contrast to the strengths of the other.

Jimmy may be exhausted by his patients, but spending time with Jimmy himself would wear out a fitness guru on adderall. Laced with Segel’s trademarks — air-playing the piano, quoting “Dracula,” not wearing pants — it’s often hard to separate the actor from his role, but “Shrinking” manages to send both over the edge. Despite his professional training, Jimmy often conflates his own feelings with his patients’ needs. Much of it is done for humor (which can work!), but much of it is also beyond reason. (Maybe don’t ask a veteran to divulge their repressed war trauma because you had a bad day?) Understanding that therapists are people, too, is all well and good, but never in a million years should anyone partake in a session with this guy — nor are there many apparent upsides to knowing him at home. (He really treats Brian like garbage, and that’s his best friend.) By season’s end, you can see how some errant traits can be chalked up to his wayward state, but plenty more appear permanent aspects of his personality. (Some may have a higher tolerance for the man-baby dad type.) 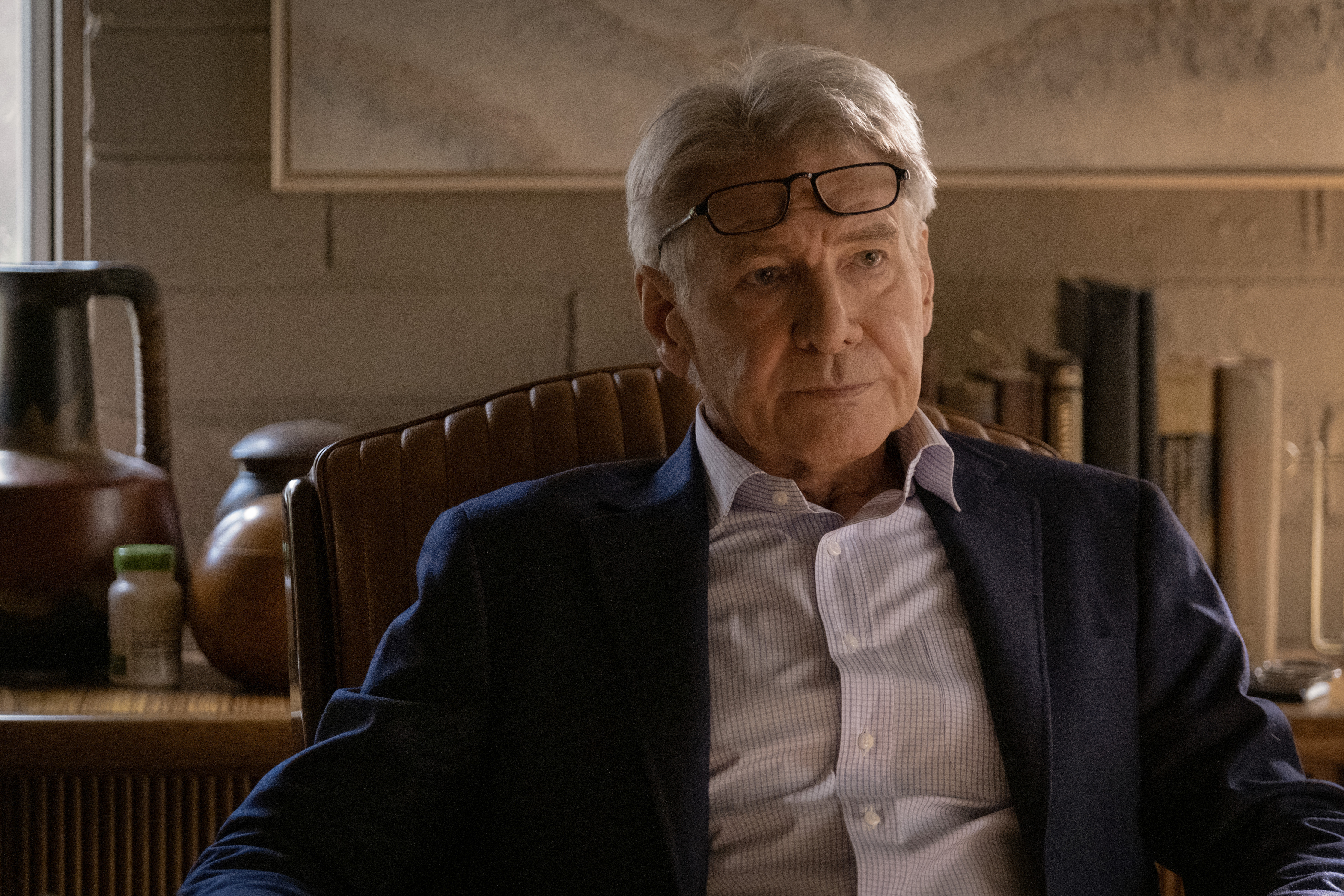 And then there’s Segel. While it was easy to invest in the actor’s buffoonery post-breakup (“Forgetting Sarah Marshall” remains a gem), it’s hard to buy Segel in this role. He’s too sensitive to abandon his daughter, Alice (Lukita Maxwell), even for a year, let alone get lost in a sea of drugs, booze, and sex workers. “Shrinking” smartly tries to leap past this picture of Jimmy by starting when he’s on the upswing, but Segel still needs to sell it — a task too great for the mopey face he repeatedly trots out in between exaggerated gestures, comic shouting, and constant tics. When separated from his professional crusade and sent into full-on sitcom mode, Jimmy can be funny. (There’s a scene where he learns about Alice’s first time having sex that’s good for a few laughs thanks mainly to Segel’s over-the-top intensity.) And yet, even then, his grief proves more exasperating than endearing.

Jimmy clearly isn’t the same winning lead as Ted, but you know who doesn’t need shades and a Southern twang to embody our new TV hero? Harrison Ford. Paul has a dry wit, open mind, and just the right level of exuberance (in comparison to his overextended acquaintances). He’s meant to be the chilly chaser to Jimmy’s sugary shot, but Paul ends up balancing out the whole show. Lawrence, Goldstein, and Segel find reasons for one-on-one scenes between Ford and just about every cast member, whether he’s riding to work with Gaby, future-planning with Brian, giving secret grandpa-esque counsel to Alice, or running into Liz at a restaurant. Even when he’s not acting like everyone’s dad, Ford juxtaposes his own gravitas to make big moments land (like when Paul sings Sugar Ray!) or cracks his indifferent exterior so tender scenes can resonate. (When Ford cries, we all cry.)

Without Ford, “Shrinking” may have been unbearable, but with him, I ended up happily revisiting episodes just to enjoy the actor’s spark. Perhaps I’m alone in suffering compassion fatigue when it comes to Segel’s cartoonish sensitive types — I wouldn’t be surprised if “Shrinking” helped expand Apple’s “Ted Lasso” TV Universe of nice white guys. Just maybe dial the cuteness down a few notches. Otherwise, any judgment is fair game.