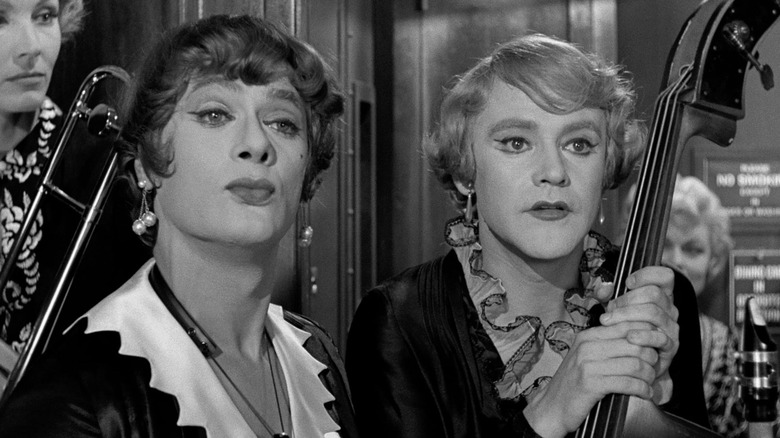 With his 1959 comedy “Some Like It Hot,” director Billy Wilder crafted a Prohibition-era fantasia, telling a wild, exaggerated story of dangerous gangsters on the tail of witless witnesses. Those two male musicians (Jack Lemmon and Tony Curtis in one of the great cinematic double acts) end up masquerading as women to evade being found out by the mob, and in the process fall in love with a fellow musician, a singer (Marilyn Monroe, whose casting helped ensure Lemmon would join) who sparks the interest of both men.

It’s that wacky screwball cross-dressing comedy that makes “Some Like It Hot” the classic that it is, but the movie’s first act actually draws from a tragic and violent historical event. While the musical comedy comprises most of the meat of the movie (as well as what most viewers remember), the Prohibition-era backdrop of speakeasies and dirty dealings was very important for Wilder.

The movie’s basic premise came from a French film from 1935, “Fanfare of Love,” in which broke male musicians dress up as women to get work in an all-female orchestra. But Wilder, always interested in adding stakes and context to the plots of the movies he made, worked with his regular co-writer I.A.L. Diamond to figure out a “life or death” reason for the cross-dressing. For him, the more serious and life-threatening a movie got, the funnier it could be, and the tension got a lot more meaningful when gangsters were ready to kill our heroes.

Diamond and Wilder found in the annals of Prohibition-era history a perfect moment for the musicians to accidentally witness. 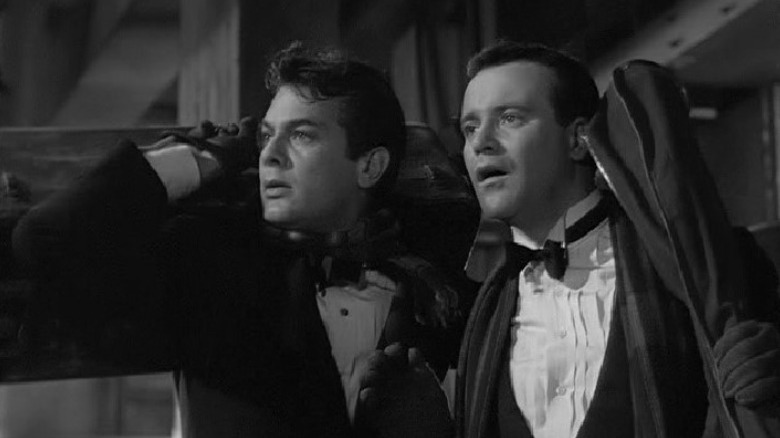 From its high-octane opening car chase to its cartoony portrayal of hotheaded gangsters, “Some Like It Hot” firmly establishes itself in conversation with gangster movies of the ’30s. Those movies often exaggerated real, ripped-from-the-headlines stories of Prohibition-era gangsters, and in the process influenced the public idea of such figures. For instance, Howard Hawks’ 1932 film “Scarface,” even if it was tamer than Brian De Palma’s controversial remake 50 years later, used a loose fictionalization of the Al Capone story as its narrative engine.

“Some Like It Hot” would draw from reality as well, as indicated by the title card by the movie’s opening: “Chicago, 1929.”

Chicago gangland characters survive a narrow chase from cops. Afterwards, these men, who we learn are employed by one “Spats” Colombo (George Raft, a regular actor in ’30s gangster movies including “Scarface”) enter a bar through the back entrance of a funeral home, carrying liquor in a casket. Meanwhile, cops talk with an informer named “Toothpick” Charlie (George E. Stone), who tells them everything they need to know to enter the hidden bar.

When the heroic musicians, Joe (Tony Curtis) and Jerry (Jack Lemmon), spot the cops between sets, we learn just about everything about their characters in less than a minute: they’re fairly unprincipled, broke, in debt to a large number of people, and ready to bounce the second things are getting difficult. They narrowly avoid getting caught by the cops, but the next day they end up in a parking garage, having planned on using a friend’s car to get to a gig in Urbana. It’s there they see the massacre. 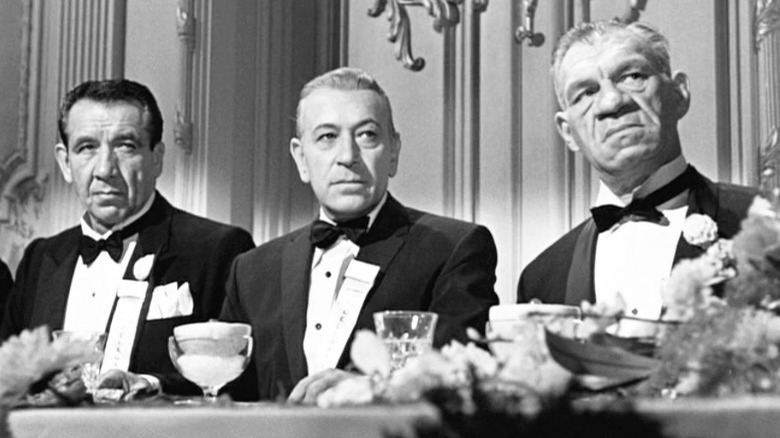 As “Some Like It Hot” co-writer and director Billy Wilder put it, according to Gene D. Phillips’ biography “Some Like It Wilder,” the script developed naturally. As a director, one of many things Wilder felt was necessary was to allow for creative freedom to explore the material on set. He was the same as a writer. Discussions abounded, and, as he recalled, for the screenplay they “brought in an actual gangland killing.”

It was only after coming up with a more high-stakes scenario about the musicians spotting a gangland killing and going on the run that Wilder and co-writer I. A. L. Diamond decided to set the movie in 1929. And it was only after the Prohibition-era milieu had been established that they landed on their inspiration for the killing: the real-life St. Valentine’s Day Massacre.

The movie drew only on the basic facts of the killing: the location (a Chicago parking garage), the implements (Tommy guns), and the perpetrators and handful of victims (gangsters). Besides that, many liberties were taken, not even including the premise of the witnesses who are forced to skip town. The staging was similar to the real incident, but the context was vastly different.

For one, the movie used the premise of an informant to immediately explain the enmity between Toothpick Charlie and Spats Colombo. That came from Wilder’s innate understanding of story structure, and a smart use of shorthand. But the massacre was actually a climactic action after years of a complex gang war over control of the Chicago liquor trade. 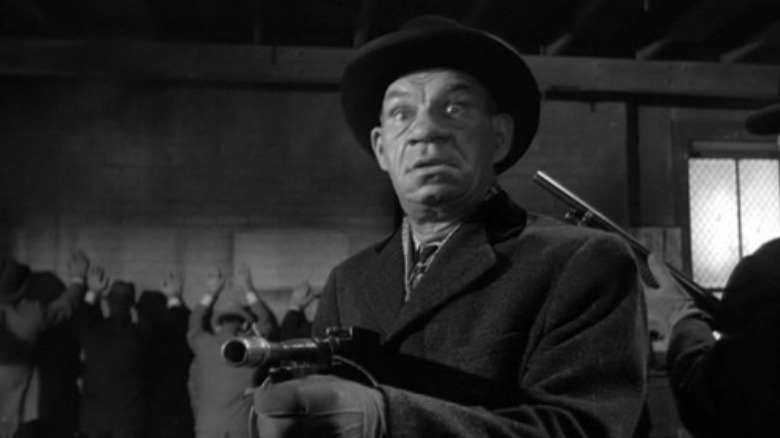 Besides being set around Valentine’s Day in 1929, “Some Like It Hot” makes plainly clear that its gangsters are echoes of the real massacre. Partially through the casting of George Raft, a bit of a “Scarface” tribute, but also through its allusions to Irish and Italian mobsters. If “Scarface” was the highly fictionalized telling of the Al Capone story, it was understood that “Some Like It Hot,” in referencing it, was telling a small chunk of the story.

The handful of men killed in the massacre came out to seven, all of whom were either direct associates of, or men with loose associations to, the Irish gangster George “Bugs” Moran. While the murder is not portrayed delicately in “Some Like It Hot,” there’s no question that it’s defanged a bit from the brutal slaying that actually happened. It was a horrific tragedy even if some of the players were unsavory characters.

While the question of who organized the murders has been disputed over the years, it’s often agreed now that Al Capone was the primary force behind it — even if he was staying at his Florida home at the time (per The Independent). As the effective leader of Chicago’s Italian mob, he had been tasked with leading the charge against the North Side Gang, led by Moran. Capone was ill-tempered and known for his violence anyway, but the history of violence and theft on the part of the North Siders demanded even more substantial criminal action on his part. 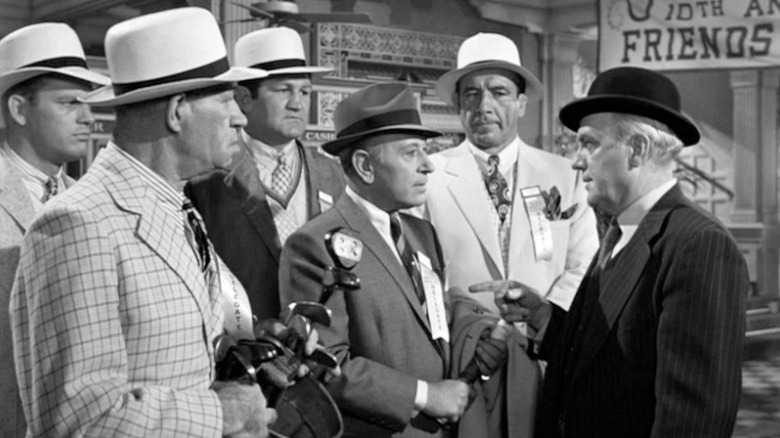 According to The Independent, one of Al Capone’s secret contacts had gotten in touch with the North Siders, telling them that a shipment of Canadian whiskey was on its way to the garage. As the Irish gangsters arrived, they waited both on the “shipment” and their boss, George Moran, who was running late.

When Moran saw the cop car that Capone’s killers had arrived in outside the building, he assumed it was the real police and quietly moved on, waiting for more information. Meanwhile, the other North Siders in the garage were brutally murdered by men in police uniforms that were fulfilling Capone’s plans. When the bodies were discovered later on, the public outcry was immense, and Capone’s clear responsibility meant little. After all, he was in his Florida home at the time. Famously, he wouldn’t face prison until getting caught on charges of tax evasion in 1931.

But some 30 years later, when Billy Wilder set to making “Some Like It Hot,” the grim truth of the story and the real violence undergirding it faded into the broader mob mythology. Even if “Some Like It Hot” was drawing from grisly mob history for its premise, the movie maintains a sparkling comic genius throughout. Even now, it’s one of the major movies for which Billy Wilder is known and one of his best. For a movie with a basis in a historical massacre, it has a remarkably light touch, even before you get to the cross-dressing.

The post Some Like It Hot Was Loosely Inspired By A Real-Life Tragedy appeared first on /Film.