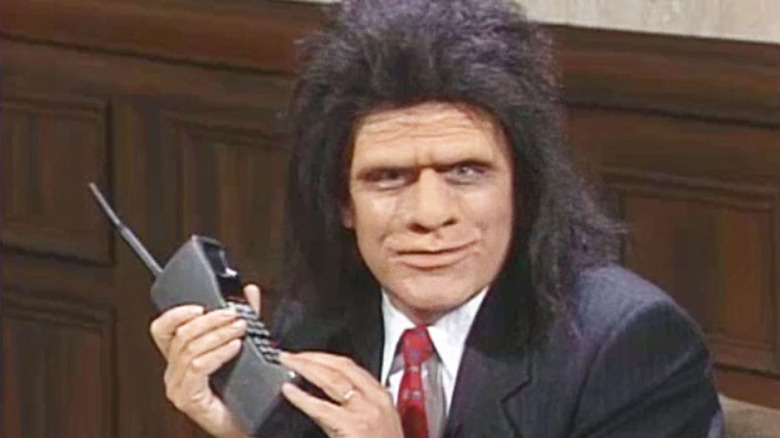 Some of the best “Saturday Night Live” sketches are the ones that, on paper at least, shouldn’t have worked. The David S. Pumpkins sketch was so dumb it could’ve easily been dismissed the moment the idea was introduced in the writers’ room, but Tom Hanks committed hard to the bit and they pulled it off. It ended up being so popular it was given an animated Halloween special the following year.

Another dumb idea that shouldn’t have worked was the classic Unfrozen Caveman Lawyer sketch. It features cast member Phil Hartman as a caveman who’d been frozen in ice 100,000 years ago, discovered and thawed out by scientists, and then went on to become a lawyer. The joke is basically that the caveman talks and acts like a sleazy lawyer, while also constantly mentioning how scary and confusing he finds the modern world to be. “Sometimes when I get a message on my fax machine, I wonder, ‘did little demons get inside and type it?’ I don’t know! My primitive mind can’t grasp these concepts,” he says.

It quickly becomes clear that the caveman is lying about his confusion about the modern world, using these lines as a way to portray himself as a disarmingly simple person, similar to the “just an average Joe” schtick politicians try to pull off. The sleazy rhetorical tactic almost always works for him, no matter what the case is about.

It was a huge hit, becoming a recurring sketch on the show three more times before audiences finally got sick of it. Later cast members like Bill Hader and Kenan Thompson consider it to be one of their all-time favorite sketches.

Lorne Didn’t Get It

The sketch’s success was particularly surprising to the show’s creator and showrunner Lorne Michaels, who was reportedly “not an initial fan of Unfrozen Caveman Lawyer,” and was “surprised it was connecting with audiences.” Jack Handey, who wrote the sketch, told NYT Magazine about how Lorne told him at an afterparty, “You know, I heard people actually liked that!”

The skepticism makes sense: the sketch is both very dumb and yet surprisingly complicated. When you hear the pitch “what if a lawyer was also a caveman?” you’d expect the humor to revolve around the lawyer being unable to do his job due to his confusion over basic modern things. You’d expect the joke to be more along the lines of John Mulaney’s recent Monkey Trial sketch, where the monkey judge genuinely interacts with the world like a monkey would, and the lawyers in the room have to work around that to win their case.

The caveman sketch goes in a more inspired direction, which can make it a little confusing on first watch. You’ll notice that in the original sketch, the audience doesn’t actually laugh that much; at least, they don’t laugh to the extent you’d expect from a beloved sketch that’s now considered a classic. That’s because the central joke is way more layered than usual. As Jack Handey explained, “A lot of comedy is going the extra step. An unfrozen caveman was funny, but that’s not enough.” Hartman gives a great performance here, but it’s the surprising level of thoughtfulness to the script that separates this from the rest of the pack. “Unfrozen Caveman Lawyer” is an odd one, but it’s a rare SNL sketch that gets even funnier the second time around.

Read this next: The 15 Best Comedy Duos Of All Time