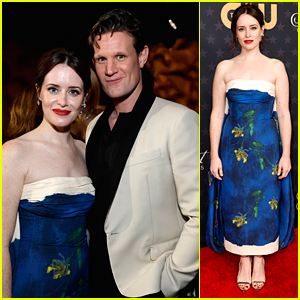 The two actors, who famously played Queen Elizabeth and Prince Philip on The Crown, were spotted back together again backstage at the 2023 Critics Choice Awards.

Held at the Fairmont Century Plaza Hotel on Sunday (January 15) in Los Angeles, Claire and Matt were both at the ceremony to support their newest roles and projects.

For Matt, he picked up a Best Support Drama Actor nomination for his House of the Dragon role. Meanwhile, Claire was there to support Women Talking, which is up for Best Picture at the event.

Just recently, Claire opened up about how she felt about Matt‘s new role, and revealed what she told him about it.