[Editor’s Note: The following review contains spoilers for “The Last of Us” Episode 2, “Infected.”]

It’s an easy shortcut to start unpacking an episode with the opening sequence and I promise that’s not going to be the case for the next two months. But it’s worth pointing out the first two cold opens in “The Last of Us” do just as much to build a sense of global unease as any overheard news report or Oval Office address or TV test pattern could. In “Infected,” the series’ second episode, the late-’60s public affairs roundtable gives way to Dr. Ibu Ratna (a magnificent Christine Hakim), a scientist and professor shown as one of the first people to recognize that humanity was in real trouble.

If last week’s first episode didn’t do enough to prime a viewing audience for a short supply of hope early on in “The Last of Us,” here’s an expert recognizing within minutes that nothing can be done. Dr. Ratna moves through the stages of confusion, curiosity, terror, and resignation, already grieving a society she knows is doomed. There’s something eerie about a scientist, a profession famous for considering possible alternatives and explanations, making such a definitive (and ultimately correct) statement. It’s as matter-of-fact as the presentation of the bullet hole in the factory worker on the autopsy table. This is not an environment where hope thrives.

Not only does that opening show what’s been lost (before we get the clarification that it’s another 2003 flashback, there’s that hopeful two-second gap when it seems like civilization might somehow have survived in Indonesia) it emphasizes how much of “The Last of Us” is built on a new, unconventional flow of information. Last week’s pilot showed people tracking the trickle of symptoms before the avalanche. Later scenes in “Infected” show how even 20 years of experience still leave some grey area around the enemy that everyone is fighting. Everyone trying to stay alive is stuck in a dangerous game of Telephone, which would be hard enough even if the motives of everyone involved were pure. Ellie becomes the simplest test case for that – she’s seeing how her notions of the world beyond the wall match with reality.

These are abstract entry points into an episode with a fairly straightforward sequence of events. Joel, Ellie, and Tess, fresh off a hairy escape from the FEDRA-controlled quarter of Boston, now find themselves in the “outside world.” Getting Ellie to Firefly allies means traversing what’s left of eastern Massachusetts, beginning with the burnt-out remains of a city littered by decades-old bomb craters. From Joel’s telling, this is the result of a success story — conceivably, mass casualties helped stop the cordyceps spread and set up the Quarantine Zone, a process that didn’t always play out in the major cities of 2003. 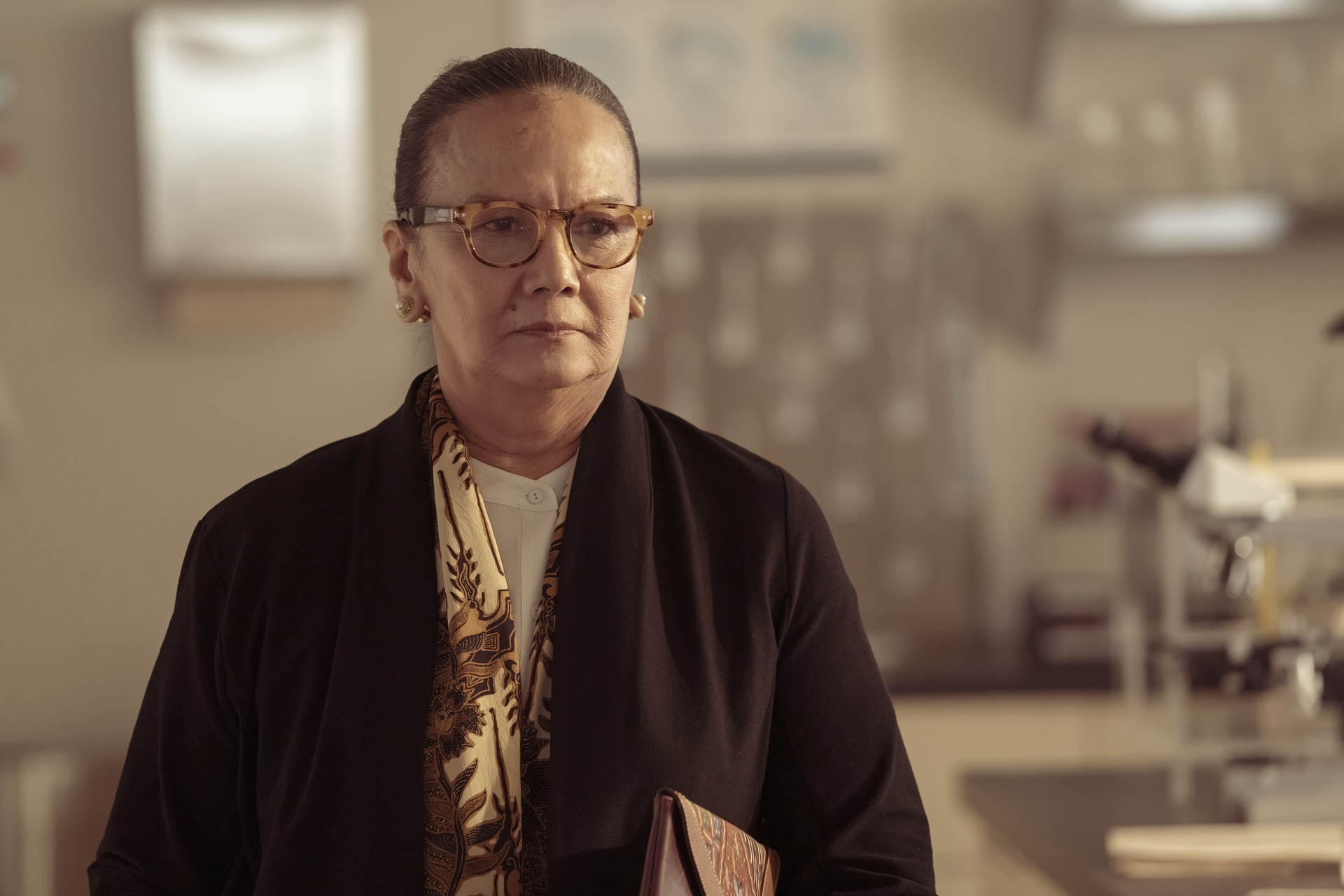 Christine Hakim in “The Last of Us”

As “The Last of Us” runs through the various story and design decisions facing any post-apocalyptic show, this second episode gives the audience a better idea of how things have decayed here. “When You’re Lost in Darkness” focused on the collapse and the new semblance of order in a controlled area. “Infected” is the first large-scale look at what got left behind. It’s not quite the irradiated, barren wasteland that comes after total destruction. It’s also not the frozen-in-amber, ghost town feel of something like 2021’s beautifully haunting “Anna,” where a population disappears far more gradually. “The Last of Us” takes the middle road, where the destruction is the thing most preserved, as plant life of all kinds start to take their course. Compare the damage left by man-made weapons trying to fight an unbeatable foe with the fractal-like, prismatic cordyceps growths coming from the entryway of the Bostonian Museum. The disease has more beauty to it than the cure.

Of course, that doesn’t go for all the discoveries that our trio make. There are dead bodies inside the hotel at the mouth the Long Way out of the city and the museum that becomes the Short Way. Their path is littered with folks, whether smugglers or fugitives or proactive travelers, who underestimated the fungal hive mind or the renegade forces still trying to outlast them. Like the attack that plays out in the rear view window as Tommy drives the pickup out of their Austin neighborhood, the group of Infected that Tess shows Ellie is a set of consequences seen from a great distance. Seeing this new world through Ellie’s eyes makes “Infected” something like a second half of a massive pilot. Ellie’s the newcomer/surrogate for how to process what Boston has become in this version of 2023. When she, Joel, and Tess have to wade through the waist-high water flooding what used to be a hotel lobby, it might as well be the opening level of a game getting a new player acclimated to the controls. By the time they arrive at the (fictional) Bostonian Museum, director Neil Druckmann has effectively created a tutorial level for the physical and emotional lengths our main characters can muster.

That also extends to the episode’s sensory experience. Score is sparse here, meaning that we’re getting used to the overriding sense of silence that will come with long stretches of Joel and Ellie’s journey. They’re away from the day-to-day hum of the QZ. The cacophony of Outbreak Day and guerrilla warfare has now given way to a world where one crunch could mean the difference between survival and Infection. Sometimes that relationship to sound is more playful (hello, new frog friend!) and sometimes it’s more instructive (just hearing the dead cordyceps root under the butt of Joel’s shotgun is enough to let him and us know that it doesn’t pose a threat anymore).

Of course, it’s at its peak in the museum room, where we get our first brush with a fully matured cordyceps Infected. This is not the kind of show where everyone spends the first season getting out of tough scrapes and close calls at the last minute. Like Tess says, her luck was bound to run out sometime. Aside from yet another example that no one in this world (outside of Joel and Ellie, at this point) is guaranteed to make it to the next episode, it makes sense that a short-handed fight against two angry opponents would only leave one of this trio unscathed. Tess’ acceptance of her fate is a mirror of Dr. Ratna’s. 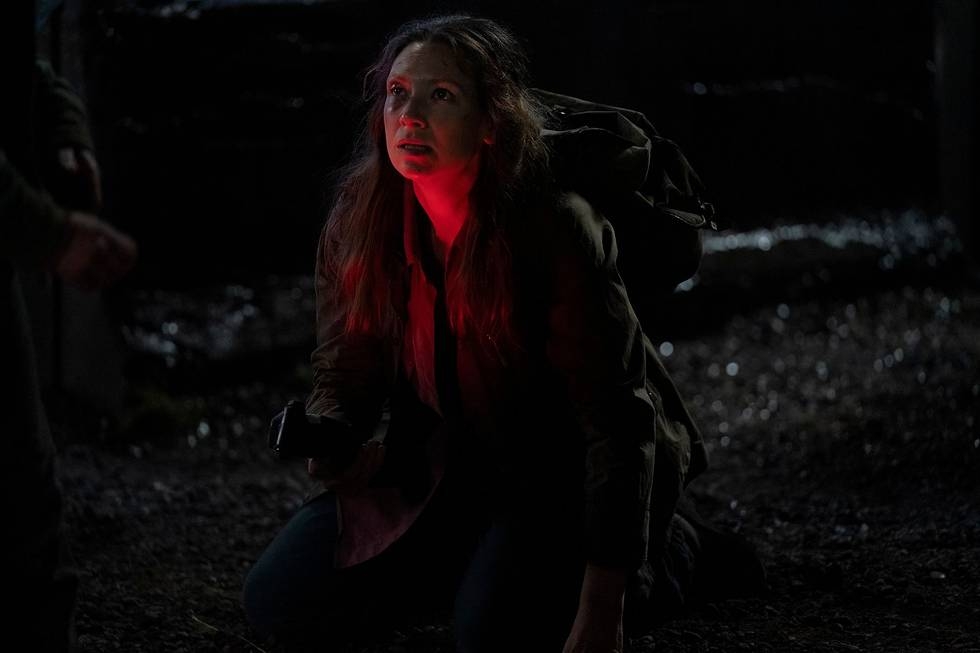 Anna Torv in “The Last of Us”

Sarah’s death stood out in the pilot not just because it needed to be the thing that drives Joel to outlast his new enemy. It stood out because it was harsh and untidy and unsparing. For the second time in as many episodes, Joel is left with only a split-second chance to say goodbye to someone he cares about. His heart hardened, Joel’s history repeats and someone close to him dies without them giving words of comfort before they go.

And that sense of terror transfers over to Tess, whose final moments are mostly spent worrying that her death won’t even buy Joel and Ellie the time they need. (As someone who struggles with lighters, I would almost certainly have that same combination of fear and frustration.) Her river of gasoline and hand grenades does end up eliminating the local Infected population, but this is sacrifice in the least triumphant way possible. Not only is Tess denied some last words from Joel, she has to deliver the death blow to the enemy while in the middle of an attack with its own kind of violence. Her bodily autonomy is the last thing taken away from her, and only thing about her death that’s on her terms is the eventual outcome. Those last moments show just how much of Tess’ pain and sadness that Torv has managed to carry just in her facial expressions alone.

Pascal, too, in this episode is once again asked to do a lot with a little. If the events of the pilot hadn’t already locked him in as a lived-in, world-weary Joel, his quarter-voice instructions around the truck and inside the Independence Hall exhibit would have done the trick. Part of him not saying much is being beaten down by survival. It’s also a heavy dose of self-preservation. Fewer words give you fewer chances for strangers to suss out who you really are and fewer chances to say/not say something that you regret. From top to bottom, “Infected” is about preserving dignity in the face of almost-certain failure. Dr. Ratna just wants to be with her family. Tess finds a way to make her death mean something. Now Joel and Ellie carry on silently, trying to grow that last tiny sliver of hope.

“The Last of Us” airs Sunday nights at 9 p.m. on HBO and is available to stream on HBO Max.