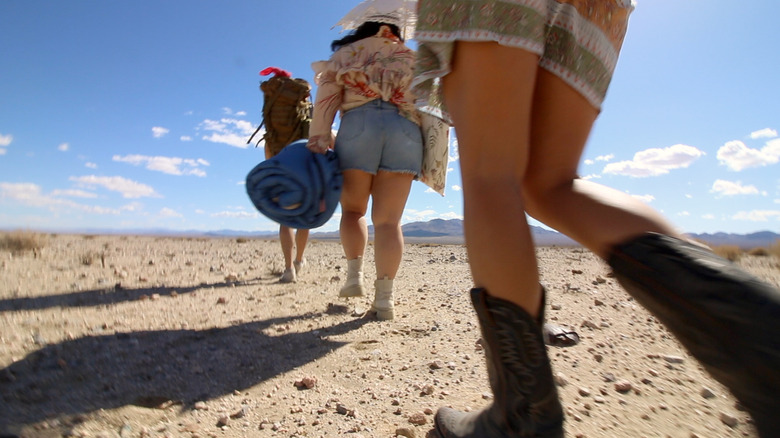 Every year it seems there’s a horror film that manages to play with convention but ultimately feels fresh and new. Last year, it was “Smile,” a horror movie that borrows from the tradition of films where our lead is living on borrowed time like “The Ring.” In 2023, it’s newcomer writer-director Robbie Banfitch’s “The Outwaters,” a movie that rightfully feels like our generation’s “Blair Witch Project” but also manages to be unique, specific, and wholly singular. More and more often, people jump to conclusions and say that found footage horror is finally dead— but “The Outwaters” is a live wire bursting with cosmic horror rage that promises to live inside you on a loop for as long as the unknown stays unknown.

“The Outwaters” is a collection of footage pulled from three memory cards found in the Mojave Desert that chronicle several days in the life of four friends who come to the California landmark to shoot a music video. What they find as they explore is some kind of unknowable phenomenon — and sooner or later, it makes contact. Needless to say, their unassuming indie shoot descends into a pit of utter chaos. 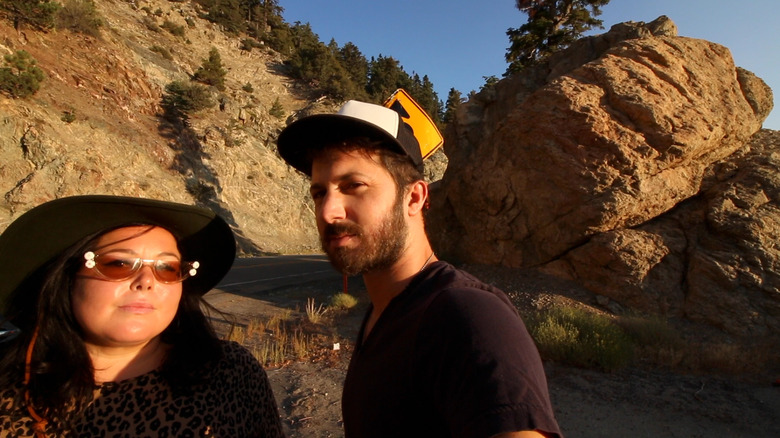 Banfitch’s debut feature takes a few feathers out of the cap of “The Blair Witch Project,” but the most effective one is its decision to play with character and ambiance for an hour, where the characters exist in mostly normal normality — until they don’t. The film’s first half follows them as people, getting us invested in them and the bonds they share and recultivate with one another before the group head out to the desert to shoot their music video for Michelle (Michelle May), one of the film’s quad. Giving us all this time with them works to the movie’s advantage, and serves to craft pitch-perfect pacing throughout the film.

We get enough time with the group — which consists of director Robbie (Banfitch), Robbie’s brother Scott (Scott Schamell), Robbie’s friend and music video stylist Ange (Angela Basolis), and singer Michelle — to actually care about them. It’s double the time “The Blair Witch Project” used to get audiences invested in the characters, and the experiment yields powerful results. It’s hard not to care deeply about this motley crew, especially considering how natural and easy their performances feel. It’s what happens when you shoot a small project with friends; The chemistry is just there, and “The Outwaters” gives us a perfect amount of time to steep in those connections before ripping them apart. 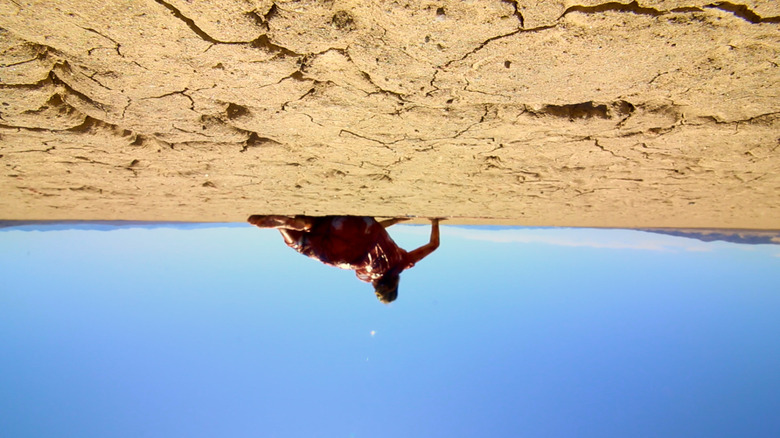 There are so many memorable things about Banfitch’s film, but the movie’s intense and sublime cosmic horror is probably the most visceral of them all. It is a major part of what makes this movie so singular. It’s not that cosmic horror hasn’t been done in this vein before, but in “The Outwaters,” it is particularly unfathomable and cruel. It hits those major cosmic horror benchmarks in its puzzling, bleak, and transcendent final act, attributes of the subgenre in every nook and cranny of the Mojave Desert waiting for you to uncover the horrors within.

Plus, the film nails the gore level you want from the subgenre and the kind of gore that we don’t always get with cosmic stories. They tend to focus more on that feeling of unknowability, but Banfitch’s brand of cosmic horror is equal parts unfathomable and blood-splattered, giving us mere glimpses of horrific things so we can put the pieces together thanks to Banfitch’s character’s impossibly small flashlight — that is, until the terror busts open wide in several key scenes. Those moments give us even more than a glimpse, and what is waiting for audiences is some of the most hellacious acts in a horror film to date, and they’re even worse once you start to piece together the film’s devastating story.

A Story To Be Dissected 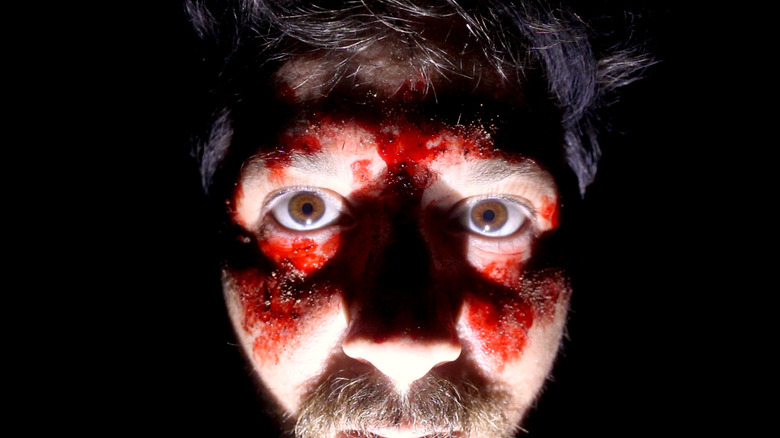 The story of “The Outwaters” is built to be deciphered and dissected, but if you follow the film with a close eye, the plot does what cosmic horror does best: prove that humans are but a cog in the wheel, disposable pieces in a board game. It is utterly harrowing, a true nightmare scenario that you wouldn’t wish upon your worst enemy because of the sheer horrific confusion of it. Cosmic horror is its most effective when its characters simply cannot comprehend the events at hand, and “The Outwaters” is a beautiful example of how to tell that kind of story in a way that makes the audience feel as terrifyingly lost as the film’s victims.

Being confused doesn’t negate the story at play, though, and the movie rewards those who pay close attention. Either way, this is a project that will have a serious amount of rewatch value, because horror fans will be piecing together the events of the story for a long time after they’ve seen it. In fact, it feels like a classic in the making in large part because of the strength of the story.

A Feast For The Eyes And The Mind 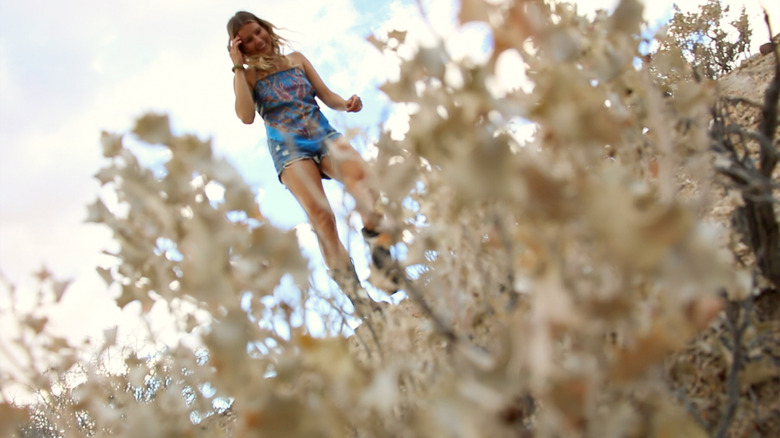 Modern found footage has a pervasive problem: it’s always shot too well, way too well for the kind of cameras most main characters would ever have access to. It tends to take me out of the movie at first, before I force myself to suspend my disbelief once again. There are a lot of found footage films I ultimately like with this problem, but the choice is pervasive and it’s one that becomes impossible to forget with these films. Breathe a sigh of relief, because “The Outwaters” doesn’t have this issue. Banfitch’s camera—a modest DSLR that makes sense as a mid-grade tool for his on-screen counterpart’s director-slash-DP arsenal—is solid quality, and brings us some really stunning imagery even before the blood starts splattering, but it isn’t so good that it feels out of place. This is another place where the film learns from the successes of “The Blair Witch Project”; Mid-tier equipment makes a well-crafted story like this that much more believable.

“The Outwaters” is a feast for the eyes and the mind, but it is also a feast for the ears as well. The special effects are superb for a low-budget project, from the film’s seldom-seen creature to the slimy intestine-like entities that do its bidding, to the film’s prosthetics and blood work. Everything, and I mean everything, feels and looks believable, and at times, Banfitch’s project feels much more high-budget than it actually was because of how effective these set pieces are.

Scoring And Cutting The Unknown 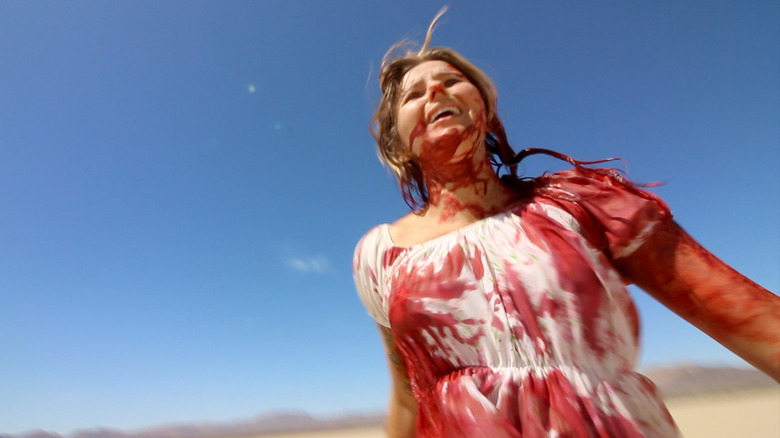 Editing and sound are deeply pivotal to the story Banfitch is telling, and he (having done both of these jobs himself along with directing, writing, and starring) excels in both areas in ways that manage to compel and confuse while producing unbridled awe within the audience. To explain exactly how is to partially spoil the film, but “The Outwaters” deals entirely with the unknowable, and quick cuts paired with nearly undecipherable imagery and piercing inhuman sound all contribute to the film’s overarching sinister tone.

Horror has been having a banner year for a few years now. There’s no denying filmmakers of the genre continue to innovate and inspire, fostering shining new ideas for the world to sink their teeth into on the regular as of late. But every now and then, a horror film comes along that feels undeniably exceptional. “The Outwaters” is one of those films. 2023 is already proving to be an incredible year for the genre less than a month out of the gate, but with talent the likes of Banfitch at the forefront of the found footage game, it seems this year’s horror offerings aren’t anywhere near done leveling up. “The Outwaters” is an immersive hellmouth waiting to, quite literally, swallow us up and spit us back out into the landscape more horrified of what the universe is capable of than ever before — and trust me, you don’t stand a chance against what it has in store for you.

Read this next: The Best Cosmic Horror Movies That Will Make You Hate The Unknown

The post The Outwaters Review: A Cosmic Horror Hellmouth Dying To Swallow You Whole appeared first on /Film.