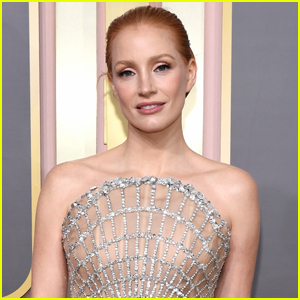 Jessica Chastain glittered in a diamond-encrusted gown at the 2023 Golden Globes earlier this week, but that wasn’t the only part of her look that glowed.

The 45-year-old Good Nurse star’s highlighter was also on point, and her makeup artist revealed exactly what they used to achieve the effortless, lit from within shine.

The secret was in the application. Kristofer used the highlighter to light up more than Jessica‘s cheeks.

They also highlighted the “bridge of the nose, shoulders and collarbone” to create “an all-over glow,” they explained in a press release shared with Page Six.

Charlotte Tillbury’s new highlighter comes in six shades, and you can pick it up on Sephora for $48.

“It is the perfect amount of shimmer but not TOO much shimmer which I love,” one enthused fan wrote in a review.

Another wrote “It is easy to use and blends wonderfully. It’s not heavily pigmented, but does give you that little something extra that you’d expect from a highlighter.” They added that the highlighter didn’t emphasize fine lines on the face.

If you wanted to replicate more of Jessica‘s look, you can use an eyeshadow palette like MAKEUP BY MARIO’s trendy new Ethereal Eyes Eyeshadow Palette ($68) to create light dimension in the outer corner using a light neutral matte and a softer eyeshadow brush. It appears that Kristofer used a soft shimmer shadow on the majority of the lid to brighten the eye.

They finished off the neutral, subtle glam with a dusting of blush on the cheeks – try Charlotte Tillbury’s Cheek to Chic Blush ($40) if you want to stay with the brand – and a sheer lip stain that added just a pop of color.

If you’re looking for more makeup to add to your collection, did you know that all of these celebrities had brands available at Sephora?