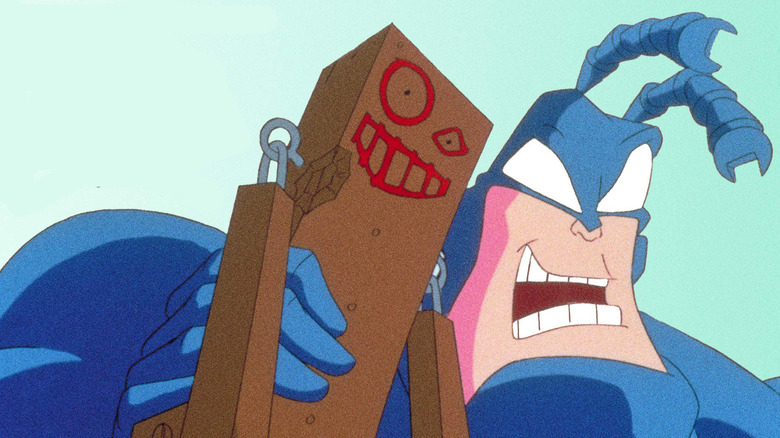 The Tick was a parody superhero character originally created by cartoonist Ben Edlund in 1986. The character was a massive pile of muscles wrapped in a skin-tight blue bodysuit, and sporting a tiny pair of tick antennae on his head. He was incredibly strong, incredibly noble, and not at all bright. The Tick was just as in love with the iconography of superherodom as he was with committing acts of justice. He would frequently narrate his own adventures. Ironically, his powers and outfit had absolutely nothing to do with pesky, blood-sucking arachnids. When a thug points out to the Tick that most ticks have eight legs, he confidently retorts “How do you know I don’t?”

In the 1994 “The Tick” animated series, the title hero was voiced by Townsend Coleman, and his sidekick Arthur, a man in a moth suit, was voiced by Micky Dolenz, then later by Rob Paulsen. The Tick was surrounded by a coterie of equally bizarre, egotistical, or generally clueless superheroes, including American Maid (Kay Lenz), Die Fledermaus (Cam Clarke), and the Sewer Urchin (Jess Harnell) who sounded like Dustin Hoffman’s character in “Rain Man.” Captain Lemming also appeared … very briefly.

“The Tick” came at a time when it was in very vogue to lampoon superheroes, and satires of the genre were common (see also: “Earthworm Jim,” “Too Much Coffee Man,” “The Flaming Carrot,” “Mystery Men,” etc.). “The Tick” became a cult classic par excellence, eventually spawning two additional live-action retreads in 2001 and 2016.

The Tick Vs. The Uncommon Cold 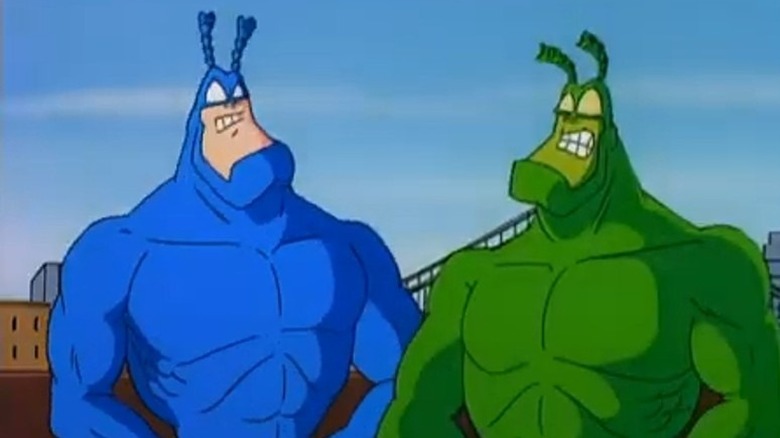 One of the writers on “The Tick” was Henry Gilroy, who began his career working on “Tiny Toon Adventures,” and would go on to write for “Batman: The Animated Series,” “Earthworm Jim,” and many other notable animated programs. He would become the series head writer for “Super Robot Monkey Team Hyperforce Go!” in 2006, and “Star Wars: The Clone Wars” in 2008. Most recently, Gilroy has written for “Star Wars Rebels” and is currently leading “DreamWorks Dragons: The Nine Realms,” a spinoff of “How to Train Your Dragon.”

Gilroy recently sat down with /Film’s own Rafael Motamayor to talk about his long and prestigious animation career, and his time working on “The Tick.” Gilroy revealed that his first episode on the show, an episode called “The Tick vs. The Uncommon Cold,” contained a snot-based joke that was just way too gross for the studio. The mucosal mummery was ultimately cut.

It should be noted that the Tick has no secret lair, and lives for free in Arthur’s down-rent apartment in The City (the city in “The Tick” is called The City). In “The Tick vs. The Uncommon Cold,” the superheroes find they have a new neighbor in the building named Thrakkorzog (Jim Cummings), an interdimensional space alien with designs on world domination. Thrakkorzog possesses a miniature sentient tongue that wants to eat human brains and requires a cheap place in the city where it can build a cloning machine. Thrakkorzog makes a zombie clone of Arthur and sends it to the Tick’s apartment to collect a tissue sample.

The Tick is indestructible and has no visible hair, so collecting cells proves to be difficult. Clone Arthur has to settle for a used Kleenex that the Tick used to blow his nose. 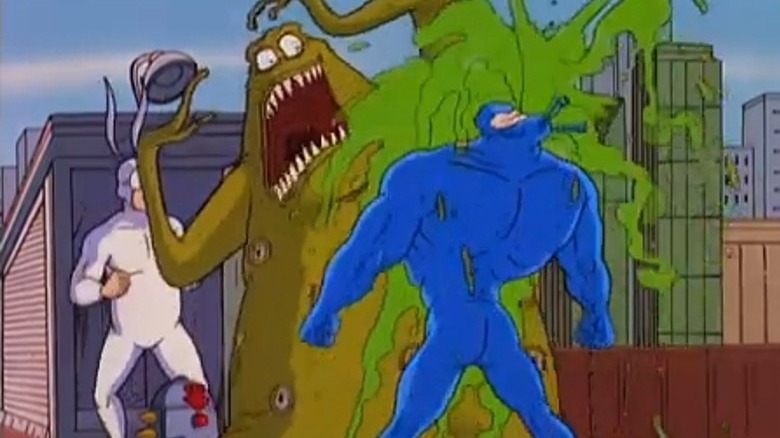 The resulting clone, taken from the Tick’s “tissue sample” is a slimy, liquid being made of mucous. It’s pretty sick. When the Tick inevitably fights his evil clone, he finds that his fists pass right through the viscous mucous being. He will ultimately have to powerfully sluck his nemesis into his mighty sinuses and sneeze him through an interdimensional portal.

Henry Gilroy had envisioned the slucking scene as slightly grosser than it was. Evidently, the Tick’s nostril was meant to get its own closeup, a closeup the studio objected to. Gilroy said:

“I think there was a close-up of a wavering nostril, with snot going up of it. It was disgusting. They go, ‘That’s probably too much. That’s too gross.'”

One might suppose a being made of snot was just disgusting enough for the censors.

Gilroy would also write the less snot-forward episodes “The Tick vs. Proto-Clown,” wherein the superhero takes a cosmic journey through his own subconscious while lost in the vacuum of space. Gilroy was equally silly on the “Earthworm Jim” episode “Trout!” wherein the earthworm hero (enhanced by a high-tech super suit) went on a road trip to find the long-lost fur-bearing trout. That episode saw characters trying to eat a Stuckey’s nut log so heavy, it could anchor ships in a storm. Earthworm Jim has a pet named Snott. Snott is a two-foot-long living booger. No one can accuse Gilroy of not having a (slightly off-center) sense of humor. As far as internet research has been able to uncover, Gilroy has not written any additional TV episodes explicitly centered on snot.

Read this next: Overlooked ’80s Cartoon-Toy Franchises Ripe For Revival

The post This Snotty Joke Was Just ‘Too Gross’ for The Tick Animated Series appeared first on /Film.